ArchaeoFox: Exploring the World Through the Past

Homes of the First Dubliners: Building a Viking Longhouse on Our University Campus at UCD

As excellent as preservation is in Dublin from the 10th and 11th centuries, the evidence for its houses survives to knee height at best. How we imagine these houses looked, from their doors to their roofs, to the ways they are drawn in books or rebuilt in heritage centres, are all inferred through archaeological and architectural interpretations.

At UCD Centre for Experimental Archaeology and Material Culture however, we have a unique opportunity to test these interpretations, and explore first hand, some of the architectural features of the kinds of houses that would have stood in Dublin over a thousand years ago. 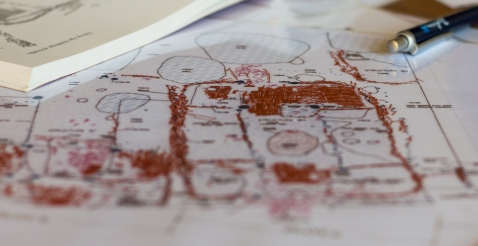 Detailed drawing of one of the Viking houses excavated in Dublin Eileen, Brendan and Stephen stand at the heart of UCD Centre for Experimental Archaeology, where our Viking House will stand.

“We are building a house using a simple rule”, Says Prof. Aidan O’Sullivan, Director of UCD Centre for Experimental Archaeology, “It must be based on archaeological evidence, we cannot introduce any modern features that make it stronger in engineering terms and aspects like the sizes of the post-and-wattle or timbers we use, must be the same as what was found in the Viking Dublin excavations”

After months of planning and material gathering, the building of a Type 1 Viking Dublin house at UCD has finally begun. The structure, whose doorframes and post-and-wattle foundation walls are now firmly in the ground, is primarily based on excavated houses at Temple Bar West (BN1), and Fishamble Street (FS90) and uses environmental evidence from the Viking Dublin excavations, provided by Dr. Eileen Reilly.

“With fragmentary evidence of around 600 buildings;… this is the most extensive record of its kind from Medieval Europe” – Pat Wallace (2016)

Viking house in progress at UCD Centre for Experimental Archaeology

Of the hundreds of houses identified from the fragmentary remains of Dublin’s first settlement, the vast majority were nearly all of a kind known as, ‘Type 1’. Like other examples of Norse houses throughout Scandinavia and the Viking World, and unlike Irish Roundhouses, Type 1 houses were long, rectangular structures.

They had an entrance at both the front and back ends of the building. Stepping over a wooden threshold, one would have ducked below the lintel and walked into a rectangular three aisled room with bedding or sleeping areas either side of a stone lined hearth. After a moment, with eyes adjusting to the darkness, before taking a seat by the fire you might then have rested your hand on one of the most characteristic features of a viking house; one of always four, thick internal roof support beams.

These features and the senses of space they give are gradually what is beginning to take shape at our Centre for Experimental Archaeology; from fragmented traces in the ground, to physical constructs, the dynamics of which haven’t been tested in over a thousand years. 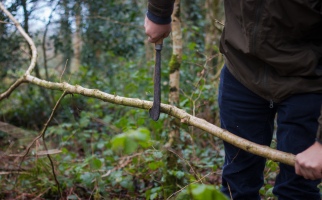 Staying close to the Archaeological evidence, Ash was chosen for the door jambs, thresholds and lintels

Hazel rods were chosen from a coppiced woodland in Ireland

Gathering Hazel rods in a coppiced woodland in Co. Offaly

For more information about the project see our Early Medieval and Viking House Project section in ‘current projects’. And follow ArchaeoFox to receive project updates. 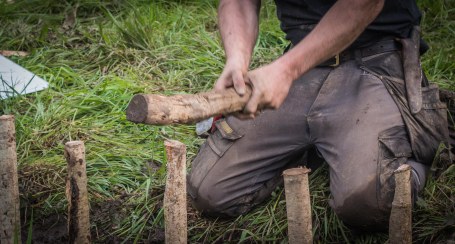 Wattling is the process of wearing thin rods horizontally around thicker vertical uprights to make a fence or wall. 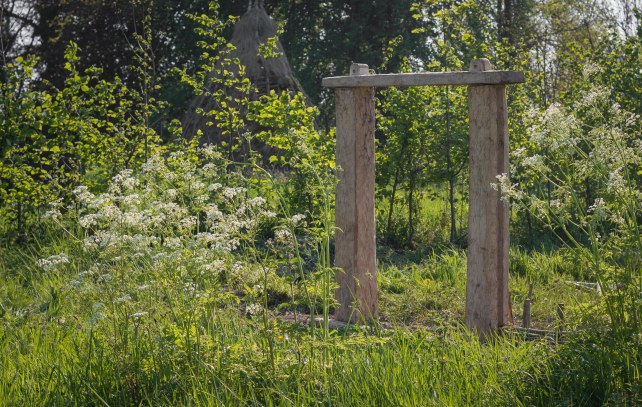 The door jambs were handmade from complete ash trees, with axes

Daily progress can be followed at: UCD Centre for Experimental Archaeology Facebook Page & Here at www.archaeofox.com

For More Information on UCD School of Archaeology visit: https://www.ucd.ie/archaeology/

← When the Bow Met the Arrow: My Viking Bowmaking Workshop at Lykopis Archery School in Vancouver, Canada
The Culture Beneath the Cornfield: Excavating the Bronze Age Site at Iđoš, Serbia →

5 Comments on “Homes of the First Dubliners: Building a Viking Longhouse on Our University Campus at UCD”